If you are interested in ham radio and you buy a new car, the question of whether you want to install a radio in the car comes up, and if you do want to install it, how and where does it fit.

For some people, these are easy questions to answer: Yes, and wherever is most convenient.

But if you are like me, you may have an aversion to making holes in a brand new car, and also worry at least a little about the look of the final installation.

I have a Yaesu FT8800 radio which I had installed in my previous car (a 2005 Jeep Grand Cherokee). In that case, the radio was mounted under the dash, power came from a cable running through the engine compartment  firewall, directly to the battery. The antenna was mounted on a K400 mount secured to the edge of the hood, a few inches from the rear, and the antenna cable run around the driver’s door weather seal directly into the engine compartment.

When I started looking at the new Jeep (2012 Grand Cherokee), there were a few problems with simply using the same scheme.

The first problem was that the dash construction has changed significantly. On the 2005 version, the dash under the steering wheel was fairly thick plastic, hinged at the bottom with clips at the top. A firm tug would open it up, and it would fold down exposing all of the wiring, and access to the firewall. On the 2012, the plastic is much thinner, and is held in place with screws and (many) clips. It is a non-trivial task to open that up.

Next, I looked in the engine compartment to see if there were any conveniently unused holes through the firewall, or if it were possible to piggy-back on existing cable holes.

There immediate answer was no. No spare holes, and suspiciously few things actually passing through the firewall, which now seemed to consist of two well spaced metal barriers.

But the biggest surprise was … no battery.

Ok, so how do I get to it? Well, the official Chrysler method seems to begin with “remove the passenger seat”. Hmm… really??  Yes. Really.

I took a look, the passenger seat is also home to the audio system amplifier, and being an electrically operated seat, and heated, there are quite a few connectors that would need to be undone before you could even start to remove the seat.

However, it appears that the instructions had been written with non-electric seats in mind. The electric seats have much more travel, and most importantly, can be raised up, giving more room to get access.

Now, how to connect to it. Unlike previous cars, there are no convenient nuts and bolts securing the cables. In this case, there is what appears to be a plastic wedge arrangement which is tightened with a nut and bolt. Of course, the plastic does a fine job of insulating the securing nut and bolt from the terminal. Closer inspection revealed a secondary connection on the positive terminal, so loosening that off allowed a spade terminal to slide under, and tighten back up for a good connection to the positive side of the battery. For the negative connection, there was no hope of connecting directly to the terminal, so a connection was made to the car body via the nuts securing the battery clamp. That worked fine.

The FT8800 has a detachable face, and when I bought it, it came with a remote mount kit to mount the face separately from the radio.

I looked around for somewhere to mount the face, and eventually settled on the idea of using the compartment with a door, in the middle of the dash console below the radio and heater controls.

For the radio body, I explored several options, but decided that under the driver’s seat was probably going to be the best location.

There is a similar panel to the battery cover under the driver’s seat. Lifting this revealed a number of connectors to pass wiring looms to the outside of the car. This provides a relatively secure location to mount the radio mounting bracket without having to make holes in the bodywork. 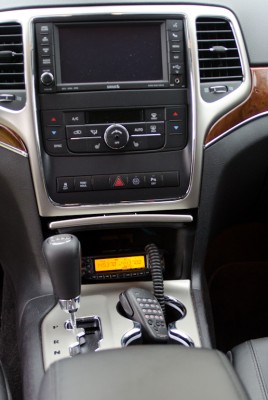 There is room to place the microphone inside and close the door when not in use.

The next obstacle to face was mounting the antenna.  Purists would go straight to drilling a hole in the center of the roof and installing an NMO connector. I am not enthusiastic about making holes in the roof of my new car, and besides, it has a moon-roof and sun-roof and so the majority of the roof is glass.

I initially looked to my K400 mount. But this requires a flat edge around 4″ long. When I looked, this car is amazingly … curved. Hardly a straight edge anywhere. The only flat edge on the hood would be pretty close to the front. Not only would that look odd, but getting the cable into the engine compartment would be a challenge.

I eventually settled on the idea of using a glass-mount antenna, but various obstacles prevented me from going in that direction. I eventually decided that a section of flat metal about 2″ long on the rear door might work. Especially since there is a convenient hole with rubber plug at the top left of the body underneath the door. 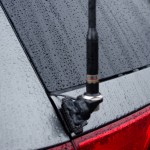 I obtained a K412S mount, which is similar to the K400 but only requires about 1.5″ of space to mount. This fit perfectly.

The hard part was getting the cable from the hole under the door, to the space behind the plastic trim at the roof level. I could get a piece of plastic “string” through, but there was just not space to pull the SMA connector through. After about an hour of trying, I gave in and removed more plastic trim around the top and left of the rear door. This enabled me to thread the cable through fairly easily. When it got to the rear door, I simply pulled the door seal away, and tucked the cable behind the exposed interior trim, down the side of the car, under the door sill and out to the radio. 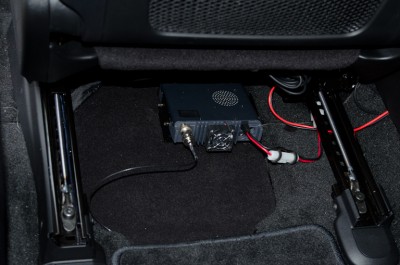 I initially had some doubts about whether the radio would be really audible in that position, or if I would need to look at obtaining and mounting an external speaker. As it turns out, the radio is perfectly audible.

The antenna position is not ideal, but in practice seems to work very well. I don’t think that I would want to mount my larger (5/8 wavelength) antenna on that small mount, but the 1/4 wave seems to work just as well for most purposes. 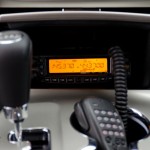 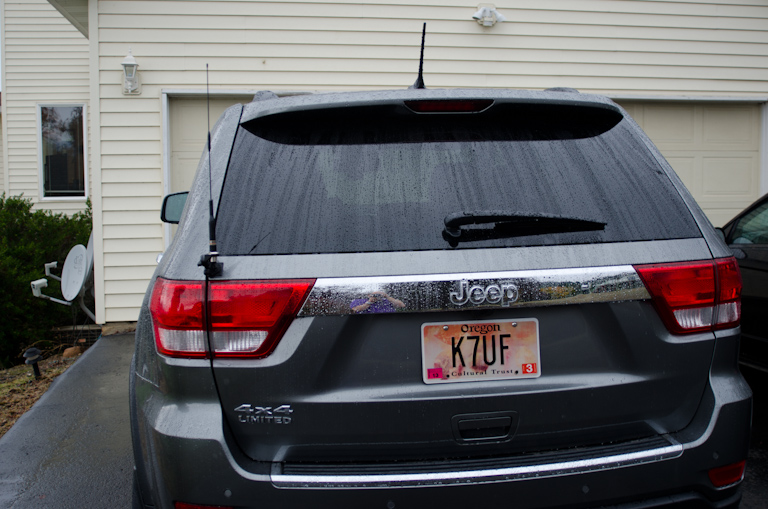