Everyone in the world must have seen the climate hockey-stick graph. A history of global temperature over a thousand years derived from tree ring data used as proxies for temperature.

It has taken time, but the hockey stick is no more. The credit for the first nail in the coffin goes to Steve McIntyre who demonstrated that the statistical methods (mis-)used to generate the graph created by Michael Mann and made famous by Al Gore would generate a hockey stick shaped graph if fed with random data. There  was also the question of a downturn in temperature in recent years being hidden by replacing the tree ring data with data from thermometers (the famous “hide the decline” trick).

The next version of the hockey stick graph was generated by good statistical methods, but some detective work by Steve McIntyre (again) showed that to create this graph most sample trees had to be excluded from the data, and that the uptick at the end was due to a very small number of trees from a specific area of Russia (Yamal), of a type that are known not to be good to use for temperature proxies, and to one tree in particular. Remove that tree and the hockey stick disappeared.

However, the climate gang at the University of East Anglia hung onto this tree for dear life. 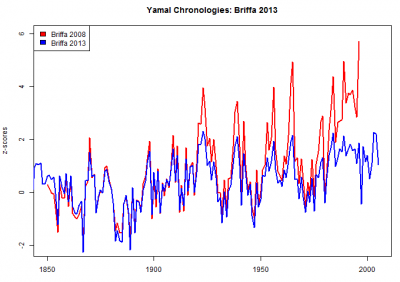 Now, a new paper has been published in which they have finally dropped The One Tree from the data, and show a graph generated from a much better sample of trees.

The graph to the left illustrates the original hockey stick graph, including The One Tree (red) overlaid with the new version.

Surprisingly, the hockey stick is no more.

In addition, if we compare the new graph to the one that Steve McIntyre generated in 2009, and a second analysis from 2011 using a broad sample of tree ring data, we 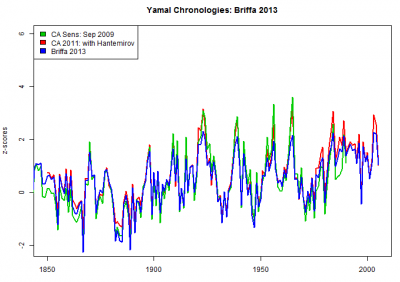 That one of the scientists involved in generating the first (and second) hockey stick graphs finally comes around to agreeing that the Earth is not flat is a huge step forward in bringing some sense and credibility to climate science.

Kudos to Keith Briffa for having the integrity (and the courage) to do some real science and publish the results, even if it does contradict previous work (as well as the frantic cries of the “climate change” doomsayers).

Of course, none of this would have happened without the work of Steve McIntyre, and his dogged persistence in getting people to see the truth.

See his article on this topic here: http://climateaudit.org/2013/06/28/cru-abandons-yamal-superstick/