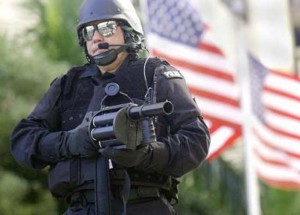 When America fought for and gained independence from England, one of the first things that they did was to establish a framework of laws. These laws were largely based upon English Common Law, and later, when deciding upon a constitution for the United States of America, the freedoms and limitation upon government power enshrined in Magna Carta, which was established in England in 1215 were used as the base.

The most fundamental of these freedoms was the idea that an Englishman’s home was his castle, and that he was safe there from government interference (unless a court could be convinced of the necessity of violating the sanctity of that castle) and that he could defend his home against any and all trespass with only the exclusion of court ordered proceedings.

That basic idea, nearly 1,000 years old, has stood the test of time. That is, until 2011 in Indianapolis, Indiana.

The supreme court of that state has decreed that if a police officer wants to enter a home, for any or even no reason, the homeowner must allow him to do so and not impede him in any way.

The rationale is that in resisting a police officer, the stakes are raised and violence is a likely outcome. What the homeowner should do, is to take his grievance to court, and allow them to take any action it may see fit.

This is supposing that the invading police officer cares to give his name to the home owner. Before attempting to record the invasion, the homeowner probably needs to remember that Indiana police are apparently quite camera shy.

Besides overturning 1,000 years of legal precedent and one of the cornerstones of the US Constitution this is alarming because of the implications for future broadening.

The same rationale can be used to determine that the homeowner should not attempt to prevent any person from entering his home. Trying to do so is highly likely to lead to violence, and assuming that the invader will provide his name and address, the homeowner can seek his redress in court.

The sooner this makes its way to the United States Supreme Court the better.  Should they fail to slap it down, with (hopefully) a sharp rebuke to the justices of the Indiana supreme court, then we can officially declare the USA to be a police state and the constitution formally abolished.

For reference, the 4th amendment to the US Constitution says:

The right of the people to be secure in their persons, houses, papers, and effects, against unreasonable searches and seizures, shall not be violated, and no Warrants shall issue, but upon probable cause, supported by Oath or affirmation, and particularly describing the place to be searched, and the persons or things to be seized.

We hold that there is no right to reasonably resist
unlawful entry by police officers.