A recent article in the Frankfurter Allgemeine Zeitung, one of the leading newspapers and probably the most mainstream political commentary publication in Germany was by any standards a rather negative and stinging commentary on the growing “Green Tyranny” in Germany.

The source of their concern is  one Winfried Kretschmann being sworn into office as a State Minister. Herr Kretschmann is a very hard line Green proponent, and upon taking office made no conciliatory noises at all, simply stated that the ways of doing business are going to change.

Perhaps unrelated to Herr Kretschmann’s elevation (or perhaps not), we now have news that the German government has decided to close down all of its nuclear power generation by 2022. This is a complete reversal of policy, which was to increase nuclear capacity at the expense of coal, oil and gas powered generation (and so reduce CO2 emissions). Exactly what is going to replace this capacity, as well as expand upon current capacity over the next 10 years isn’t mentioned, only that it will be “renewable”. This much capacity may be feasible from hydro electric generation, but for reasons never clearly explained, the “renewables” crowd refuse to recognize hydro electric generation as being “green” or “renewable”. 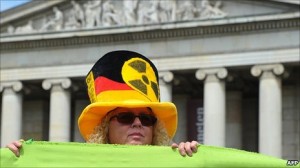 One of the disturbing aspects of this nuclear decision is that it is directly in line with a document published recently by the German Advisory Council on Global Change (WBGU), which appears to be a self-appointed “advisory council” consisting entirely of academics involved in climate research.

In this document they propose that within the next 40 years the world must abandon all nuclear power as well as all fossil fuel based power generation and transport systems.

The proposal to abandon all nuclear power is based upon a rather hand-waving explanation pointing to Fukushima, and spent fuel problems. Of course, they don’t take into consideration the fact that the Fukushima failure was the result of an earthquake of a scale not taken into account in the (40 year old) design, which the plant actually survived, or the tsunami which followed, which was not taken into account at all in the design, and that so far, there has not been a single fatality related to the nuclear nature of the plant. On the spent fuel issue, they do not acknowledge that the “problems” are mostly political. Nor do they consider alternative nuclear technologies which are not only cheaper and safer, but produce much less (if any) waste to deal with. It is simply assumed that nuclear = bad, and that it must go.

Similarly, there is no discussion of the problems with their assumptions on man made global warming and its implications.

They do not acknowledge that all the computer models upon which their impending catastrophe is based predict a direct relationship between atmospheric CO2 and temperature and that although CO2 has continued to rise, there has been no rise in temperatures for the past 12 years, perhaps even a slight decline.

They do not discuss why they assume that the effects of temperature rise are all negative and catastrophic.

They talk about not only limiting CO2 emissions, but employing technologies to remove CO2 from the atmosphere. Carefully ignoring the fact that current CO2 levels are at one of the lowest points ever in the history of the Earth, dangerously close to the point where plant life cannot exist. That increased CO2 improves harvests (which is why CO2 levels are artificially raised in commercial greenhouses).

They also talk of the need to change dietary habits, to remove meat from the diet. At first glance, this may seem consistent with the need to use vast tracts of arable land to produce bio-fuels, but a closer reading seems to imply that even bio-fuels are not acceptable, since they still produce CO2.

Then there is the discussion on the need to reform urbanization. Presumably this involves re-deploying city residents who no longer have jobs in the “carbon economy” to the land to grow crops. Its hard to say, there is a lot of hand-waving around exactly what they mean in this area.

But the real killer in this document is the admission that even with “agents of change” in place in all appropriate positions of power – which, by the way, they claim is already the case, people will need to be “educated” to accept these changes and help move them forward. Also that the democratic process doesn’t lend itself to such rapid change in fundamental sociological and lifestyle changes, so a “strong liberal government” is required, along with a (presumably un-elected) steering body driving appropriate legislation.

The steering committees are needed at national  and supra-national level (e.g. EU and UN).

Democracy has to take a back seat for a while.

You have heard tales of “A New World Order”. This is your first glimpse of what it looks like, and more worryingly, that it seems to be actually starting to take shape.

The sudden rush appears to be perhaps recognition of the fact that their whole excuse for having to take drastic action is based upon the man made global warning theory, and that reality is rapidly disproving the model results. Without impending doom, there will be no stampede down their carefully prepared path. In fact, people will begin to see the whole operation for what it really is – a power grab by a small group of eco-fanatics.