Back to the dark ages 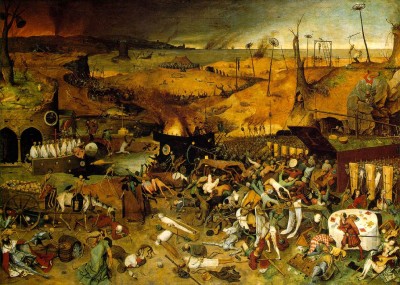 The world was on an upwards path. The hand to mouth existence of the past was just a memory for many. Cities were being built, universities were spreading knowledge and libraries were storing that knowledge for future generations. Trade was spreading, and publicly financed sanitation projects were driving disease and pestilence back into the darkness. War was something that happened far away, at the edges of the empire.

Then something happened. The Roman empire collapsed and was overrun by barbarians. The world descended into an age of ignorance, superstition and fear. The Dark Ages had begun, and would last for 1,000 years before the renaissance (around 1500 AD) slowly re-established civilization, and put the world back on course.

Exactly what caused the collapse is not entirely clear because much of the written history of the period was destroyed.

This was not a unique event. Previous great civilization in Egypt and Greece had gone the same way. Undoubtedly the people alive even as the descent into chaos began never thought that it could happen to their civilization. Too much invested, a world class army, trade and influence covering unthinkable distances.

There was no single event that triggered the fall, it was a long term degeneration. The lack of political will in Rome allowed the military to degenenerate to the point that when the Huns forced the Visigoth migration, there was nothing to stop them flooding the empire’s borders and ending up with the sack of Rome in 410 AD. In 476 the last Roman emperor, Romulus Augustus, abdicated. Not a big deal in itself, since he held no real power either politically or militarily, but effectively he was the last one to leave who put out the lights on the Roman Empire.

Modern historians like to play down how bad things were, even to the point of rejecting the name “Dark Ages”, but in fact it truly was darkness that descended.

But that is just ancient history. There is no way the world can go any direction but onward and upward, is there?

Well, I might argue that we are already on the downwards slope.

Lets look at a bit more history. When Victoria came to the throne in 1837, it was in an England that had not really changed for the last 1,000 years. Someone transported from an earlier period would not find much changed. People lived off the land using the same farming techniques that previous generations had used. Trade was carried by wind powered ships.

By the time of her death, Victoria had seen the rise of England to dominate the globe, driven by an industrial revolution which had replaced wooden ships with iron, sails by steam, muskets by rifles, machine guns and artillery. Medical practices began to actually become effective. Electrical power distribution was on the horizon. The internal combustion engine was being fitted into cars, trucks and busses. Radio was in its infancy, one year after her death the first trans Atlantic radio transmission was made by Marconi. Three years after her death the first powered flight was made by the Wright brothers.

A huge change in one lifetime.

In the next lifetime, even more changes took place. Antibiotics meant that previously fatal disease could now be cured, immunization bought plague outbreaks under control,  electricity was in most people’s homes, radio and television became ubiquitous, the power of the atom was harnessed producing weapons capable of leveling entire cities and generating limitless power, jet engines made mass air travel possible, Yuri Gararin orbited the Earth, starting a new exploration phase that ended with men walking on the moon, computers began to become truly general purpose and available as consumer items, faster than sound commercial flight began, the network which would evolve into the Internet was created.

The rate of change was exponential. Science fiction became reality, or shown to be hopelessly short-sighted.

So where are we now?

An image by a FaceBook friend (on left) probably illustrates this quite well. The thing to notice is that really isn’t anything new there. The cell phone has become smaller and offers more features, but its not really that much different, its still a cell phone. The car hasn’t changed much, more bells and whistles and clear-coat paint, but essentially the same, the game console is still … well .. a game console. The PC has evolved into a laptop, and has much more power, but is still just apersonal computer.

The space shuttle has … well … gone.

Where are all the new things wich didn’t exist in some form or other 30 years ago?

The stream of new inventions has dried up and been replaced by “innovation”, which is basically just re-applying or adding bells and whistles to already existing things.

Not only has the creation of new inventions and concepts dried up, but in some cases we are actually moving backwards.

We used to have supersonic commercial air transport. It is no more.

We used to have the means to put men on the moon. But no more, it was replaced with something that could only reach low earth orbit, destined to be itself replaced with what is actually little more than a glorified bottle-rocket. The people that knew how to put men on the moon have retired or died. The methods used to produce some of the materials they used is now unknown. The programs they used are stored (if not destroyed) on media that readers no longer exist for, and if the media could be read, the processors on which it ran no longer exist.

There are even a number of people that now believe that there never were people walking on the moon.

Malaria was under control, and heading for extinction. Its now back in full swing, killing millions every year, and making the lives of millions more a living hell.

Cheap farm machinery allowed third world countries to begin to produce enough food to keep their populations fed and healthy, even to build up stocks to see them through lean times. The rising cost of fuel will soon stop that.

We had cheap and abundant power, slowly but surely the power systems are degrading with power outages becoming more rather than less common. We also have the prospect of power becoming so expensive that we will go back to the time when people dreaded the onset of winter with the prospect of illness and death from the bone-chilling cold and damp.

We are moving from the age of atomic power to the age of windmills, a technology that never really worked, and won’t now.

We had the possibility of personal transport which we could use to drive from one side of a continent to another. It is now rapidly coming to the stage where using that transport simply to get to and from work may be no more than a dream.

We have gone from walking into a room, flicking a switch to instantly light the room, to sutumbling around in the semi darkness waiting for the feeble glow of our CFLs to grow into the harsh monochromatic light that we are now forced to live with. The supposed savings they produce burned up (and more) by leaving them on to avoid the long warm-up time, and having to replace them seemingly more frequently the old incandescent bulbs due to them expiring if turned on and off too frequently.

The evidence is all around that technologically and sociologically thing have come to a halt, and may even be going backwards.

The great armies built to maintain peace are disintegrating. The USSR is no more, England is finding it difficult to provision even minor engagements on the middle East. The US military power is more and more dependent upon technological superiority, at a time when domestic technology is on the decline. The US doesn’t even have the capacity to manufacture its own LCD displays.

The Visigoths may no longer be a threat to civilization, but their modern barbarian counterparts are continually present at the fringes, and announce their continued presence with random acts of terrorism.

Invasion is taking place, destabilizing societies. Continual influx from external societies is necessary for any healthy civilization, its the sociological equivalent of new DNA in the gene pool, but just as infusing new DNA by mass rape is not a good idea, there is a maximum rate at which foreign culture and people can be absorbed. Western society is well beyond those limits, building up tinder-box conditions which once ignited will be very difficult to suppress.

When the Roman Empire faded, its place was taken by the Church, which was not the warm and welcoming Church of today, but an organization typified by the Spanish inquisition and brutal suppression of any ideas of which they didn’t approve. They were responsible for holding back scientific progress as Galileo and his compatriots discovered.

The Church’s likely equivalent in the event of a new Dark Age may well be the transnational corporation. Failing that, there are many other pseudo religions (Green, Gaia etc.) who see their role as being to reduce the world population to what they consider manageable proportions, and to ensure that those population employ only green-approved technology.

Pray to whatever gods you believe in that its the transnationals that take over. If its the other group, Pol Pot’s Cambodia is going to look like a holiday camp.