By
Philip
– Posted on July 4, 2011Posted in: Uncategorized 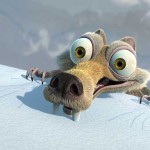 Life is getting hard for the proponents of Anthropogenic Global Warming AGW), and Greens who want to use the AGW theory to drive civilization back into the stone age (no, not Bronze – making Bronze requires the use of FIRE).

I mentioned the name of Mark Lynas in a previous article. Mark has always been very much a believer in AGW and strongly supported the UK government’s push to move to mostly “renewable” energy sources. The politically acceptable renewable sources that is, solar and wind, never things like hydro electric generation (it affects the fish, which is a big no-no, but mincing bats and birds in windmills is seemingly ok … odd that.), and no tidal generation (fish again … Greens seem to have a thing about fish). Oh, and ABSOLUTELY NEVER, EVER atomic power. Mark was a true believer.

Note the use of past-tense there. 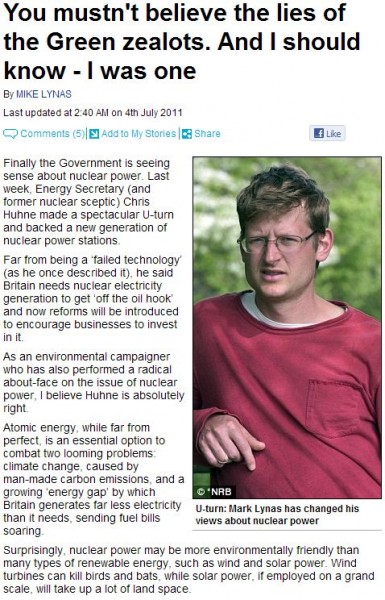 Today, Mark published an article in the UK Daily Mail. As usual in the mainstream media, the headline is chosen for its shock value, but in this case appears to be very close to the truth.

Mark’s conversion came not on the road to Damascus (don’t worry if you don’t get the reference there) but after going and doing a bit of his own research into the “facts” presented to him by various “Green” organizations on the topic of power generation, and especially nuclear power. What he discovered was that the real scientific facts were very different from what he had been led to believe. The more he looked, the more he discovered that he had not been misled, he had been lied to. Hence the rather strong language in his article headline.

He discovered that the death toll of the Chernobyl accident was 50, not the 5,000 claimed by Greenpeace, that despite all the wailing in the press about Fukushima, not a single person has died, and no one is likely to.

Unfortunately, Mark still clings to the CO2 being totally responsible for global warming theory, but we can assume that once he is over the shock of discovering that he has been lied to about nuclear energy, he will turn his attention to looking at the real science behind climate change (or whatever its called today).

On that topic, a paper was published today; Kaufmann et. al. 2011 which attempts to address an annoying little fact that until now AGW proponents have been trying to ignore. The fact that between 1998 and 2008 (2008 was the latest data the paper examines) there was no global temperature rise, while CO2 levels have continued to rise at the same rate as pre-1998.

This is the first paper in which this has actually been acknowledged. The point of the paper is to show that this can be explained by tweaking a global temperature model, changing various parameters. Basically they lay the blame on particulate matter from Chinese coal fired power stations. They don’t explain exactly why Chinese power stations are different, and their net effect is to lower global temperature, or why the answer to global warming is not therefore to fire up a lot more coal fired power stations in the West.

The paper is generally self-contradictory and based upon a really old and out of date climate model, but is important because it finally puts into print, from AGW approved scientists, the fact that global warming has stopped, and not followed the “inescapable” rise due to increased CO2.

It seems that being Green, as Kermit the Frog has always claimed, really is hard. And seemingly due to get even harder.