Growth is good. Isn’t it?

By
Philip
– Posted on October 8, 2011Posted in: Uncategorized

With all the wringing of hands and prophesies of doom from politicians, industrialists and TV talking-heads when they begin to discuss the fact that growth of the economy  is running at a feeble 2% or so, one can only assume that growth is good, and lack of growth is bad.

However, if we accept that the economy should grow, and that the growth should be sustained at some annual percentage rate, we have to accept that we are then looking at an exponential growth, as illustrated in the graph on the left.

Thats a lot of dollars.Thats a lot of production. How is this going to be achieved? In the past, economic growth has been sustained by essentially two things: an exponential growth in population, and increased productivity of workers. 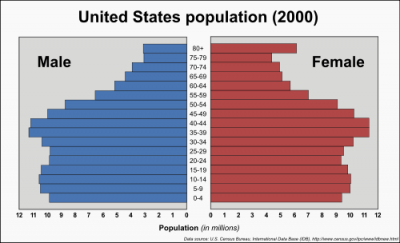 Until he 1960’s the US population was growing exponentially, but then leveled off, and has stayed relatively constant, and would actually be falling without immigration (1960’s was when the contraceptive pill became widely available).

Since the beginning of the industrial revolution productivity has been increased by the application of power and technology.

The first stage was mechanization. From the spinning wheel to the spinning jenny, from the horse drawn plough to the tractor and combine harvester, from hand-built coaches to the production lines of Detroit.

Following mechanization came automation. Applying advances in electronics and computers to replace man workers with a smaller number of workers overseeing the automatic production. Faster production of more widgets by smaller numbers of people means higher productivity, since productivity is measured essentially in widgets per person per hour.

These advantages had two effects, one was to allow each worker to produce more, and what was produced was cheaper. Production increased, and so did the market as items became more affordable, not only in America but in foreign markets.

The problem is, we have reached a point where not only are there no more workers to tap, but technological productivity multipliers have reached their limits. There just isn’t a new technology to produce cars faster and cheaper. There isn’t any new technology to make the same agricultural increases as moving from horse drawn plough to tractor, no more forcing crop yields beyond what is currently achievable with fertilizer and genetic modification.

So how is the economy to grow? Short term solutions such as making use of spare (and cheaper) population in other countries takes up some of the slack, especially since many of these countries populations are still increasing exponentially. Importing workers helps a little, artificially boosting the population, but longer term these are destined to fail. Of course, these measures really reduce productivity since the less educated, less skilled (cheaper) workers require more people to do the same work, but by only counting the managers overseeing the “outsourcing” in the head count and not the much more numerous actual workers, productivity appears to be rising.

Nature has ways of taking care of exponential growth. If a single bacteria is placed in a culture medium and allowed to divide, the bacteria population will grow at an exponential rate. Eventually, the limited nutrient available, limited space and the bacteria’s own waste products cause a catastrophic  collapse in the population. In the more general case, there are a variety of things which nature creates to stabilise a population: predators, disease, famine and war. Humans are not immune to nature. Relying upon growth in “offshore” populations is not going to last very long. 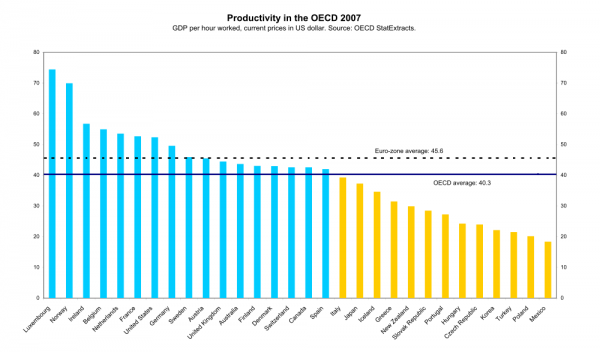 As the above chart shows, productivity among countries is not uniform. As worker availability becomes more and more of a resource contraint, how can those countries with lower productivity improve? One way is to compte with those with higher productivity for their (offshore/immigrant) workers, for energy and raw materials resources which also need to keep pace with an exponential growth.

One of the buzzwords of politicians when talking about energy is “sustainable”. In the same breath they often talk about sustainable growth. A little bit of thought shows that once a certain stage of development is reached, there is no such thing as sustainable growth. Growth needs to be zero. Over time, the balance of industries will need to change, some will grow, but others have to contract to compensate. Failure to recognize this leads inevitably to the catastrophic crash that wipes out entire populations.

Humans are mostly incapable of dealing with exponential growth. They are much more familiar with linear processes and almost always underestimate the speed with which the final stages leading to a crash occur. In the video series linked to below there are some examples of the rapidity with which things go bad. One of the examples is to take a jar and place a single bacteria in the jar. The bacteria will split into 2, each of those will split giving 4, then 8, then 16, 32, 64, 128 etc. A typical exponential growth.

After exactly one hour, the jar is full. What is amazing to most people is to realize that after 59 minutes the jar is only half full. At 58 minutes it is a quarter full, at 57 minutes one eighth. The end comes very rapidly.

The following link will take you to a page with a series of links to 10 minute videos of a lecture given by Prof. Bartlett. The whole lecture is approximately one hour long. It will be well worth your time to watch the entire series. You will never look at those innocent looking few percent growth rates in the same way again.